A variety of illuminations and decorations seen everywhere in Chengdu, Sichuan, China creates a festive atmosphere for the coming Spring Festival 2021. 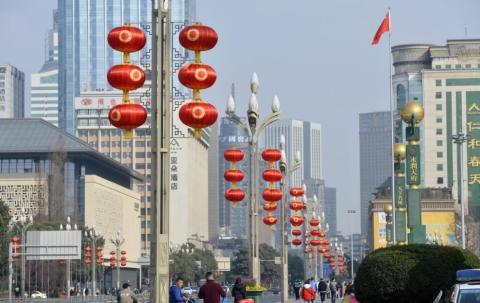 As a comprehensive and continuous event in China, Spring Festival generally begins around the eighth day of the twelfth lunar month and ends on the fifteenth day of the first lunar month. Originating from the ancient ritual for the new year, it is the biggest Chinese traditional festival, including rich historical and cultural heritages. Among them, two points are the most eye-catching: First, Spring Festival stands for the arrival of the most beautiful season of the year, in which everything takes on a completely new look. Second, it is also a festival for families to reunite, embodying the Chinese values about family bond, friendship and family harmony.

Harmonies between man and man, man and society, and man and nature are the essence of Spring Festival culture and the cultural value pursued and cherished by the Chinese nation for thousands of years.

According to Chengdu Municipal Commission for Urban Management, this year’s urban decoration for Spring Festival such as lanterns and Chinese knots on trunk streets and landmarks has been initiated on January 28 and is expected to be completed on February 7. The festive atmosphere is getting stronger throughout the city.

It is understood that these lanterns and Chinese knots will be hung until February 26 to create a strong atmosphere of festivity and peace. Sichuan Opera facial makeup, giant panda, Three Kingdoms, golden sun bird and many other Chengdu elements are combined into the design of these lanterns, Chinese knots and their brackets, so as to show its unique culture and charm as a famous historical and cultural city in the world.

Visitors in Chengdu can experience the transition of Spring Festival from a ritual for the new year in ancient times to the biggest family reunion event in the rapidly changing information age. This traditional festival with a history of over 4,000 years has taken on a new look thanks to the progress of technologies and the times.

IDEMIA to Participate in the UK Government’s Digital Identity Pilot

IDEMIA to Participate in the UK Government’s Digital Identity Pilot

WIBA Gets a Houseful Response

Zimbabwe First Lady Congratulates Senator, Dr. Rasha Kelej for Her Nomination as the African Woman of the Year 2020