HH Sheikh Mohammed bin Rashid Al Maktoum, Vice President and Prime Minister of the UAE and Ruler of Dubai, has inaugurated Dubai Electricity and Water Authority’s (DEWA’s) Innovation Centre and the 800MW third phase of the Mohammed bin Rashid Al Maktoum Solar Park, the largest single-site solar park in the world. The solar park has a planned capacity of 5,000MW by 2030, with investments up to AED50 billion. 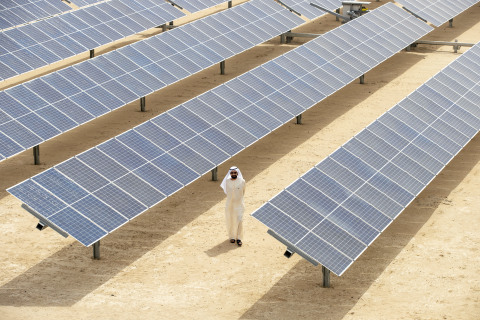 HH Sheikh Mohammed bin Rashid Al Maktoum was briefed by HE Saeed Mohammed Al Tayer, MD & CEO of DEWA, about the Innovation Centre, which is a global hub for renewable and clean energy innovation. It supports innovation and creativity in clean and renewable energy, promotes sustainability, develops Emirati talent and enhances the UAE’s competitive advantage in this sector. The four-storey building covers 4,355 square metres and is 88 metres high. The Centre’s research on solar power will support the Dubai Clean Energy Strategy 2050, which aims to diversify the energy mix and provide 75% of Dubai’s total power capacity from clean energy sources by 2050. The Innovation Centre received a platinum rating from LEED (Leadership in Energy and Environmental Design) with 101 points out of a possible 110 in the first quarter of 2020.

DEWA built the 800MW third phase of the Mohammed bin Rashid Al Maktoum Solar Park using the Independent Power Producer (IPP) model in partnership with a consortium led by Abu Dhabi Future Energy Company (Masdar) and EDF Group, through its subsidiary EDF Énergies Nouvelles at an investment of AED3.47 billion. The third phase provides clean energy for over 240,000 residences in Dubai. The facility is the first of its kind in the Middle East and North Africa region to use single axis solar tracking to increase energy generation. It also uses other innovative technologies including cleaning robots for photovoltaic panels to increase the plant’s efficiency.

Bacardi Names Mauricio Vergara as President and COO of PATRÓN

Streamlining the Compliance Ecosystem Is Imperative for the Country