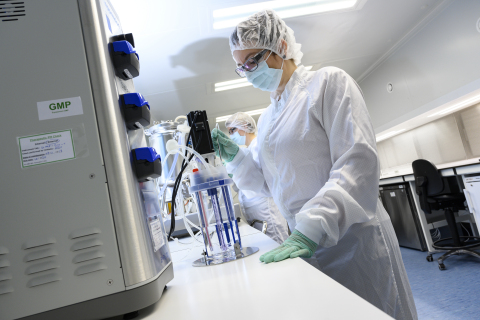 The new facility audited and accredited by Belgian Authorities will allow the production and the purification of up to 10 g scale ( up to 1 Million doses of vaccine) of RNA for use in human clinical trials and commercial supply, with potential for expansion.

Strengthening Eurogentec’s position as a leader in gene therapy

It’s definitely the ambition of Kaneka Eurogentec to become the world leading CDMO for mRNA, as we are already for the production of plasmid DNA.”.

The expertise of the company for more than 25 years as CDMO for the manufacturing of GMP Biopharmaceuticals is recognized worldwide. Two customers have already signed for three mRNA sequences including for early phase COVID-19 clinical trials.

Eurogentec was founded in 1985 as one of the first biotech companies in Belgium. Kaneka Eurogentec contributes to improving health and fighting diseases by supplying products and services to scientists involved in life science research, molecular diagnostics, and therapeutic developments. The Liège-based company is recognised as one of the major suppliers in the field of genomics and proteomics as well as a trusted Contract Development and Manufacturing Organisation (CDMO) for the bio-production of pharmaceuticals (vaccines and medicines

Kaneka is an innovation-oriented chemical company. Traditionally the company has been active in polymers, fermentation, biotechnology and electronics, as well as other fields. Business activities now span a broad spectrum of markets ranging from plastics, EPS resins, chemicals and foodstuffs to pharmaceuticals, medical devices, electrical and electronic materials and synthetic fibers. The life science related activities are currently one of the strategically important domains for Kaneka. The company has been a pioneer among Japanese chemical companies in establishing overseas operations, beginning in 1970 with a subsidiary in Belgium.