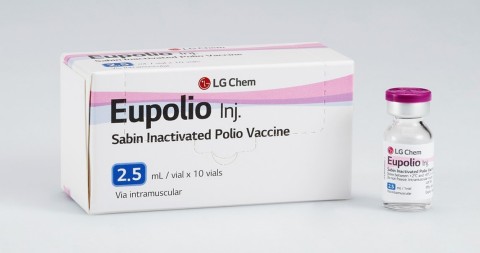 WHO prequalification of Eupolio™ is a major milestone in ongoing efforts towards global polio eradication, as it will help close the gap between demand and supply of safe and effective Inactivated Polio Vaccine (IPV) for millions of infants in need of immunization against poliovirus.

Eupolio™ is the first Sabin-IPV to obtain WHO prequalification. The main advantage of using attenuated Sabin poliovirus strains in the production of IPV is that there is a lower biosafety risk compared to wild-type polioviruses used to manufacture conventional IPVs, which has the potential to pose a biosafety hazard in case they escape from the manufacturing facility.

LG Chem initiated the development of Eupolio™ in 2014 and invested in the construction of a state of the art WHO Global Action Plan III compliant manufacturing facility in Osong, Korea. Eupolio™ demonstrated excellent phase III results in 2019, inducing high antibody titers against both wild-type and Sabin polioviruses, which will also protect against circulating vaccine-derived polioviruses (cVDPV) that make up the majority of polio cases in recent years.

Despite global efforts to eradicate poliovirus, more cases are being reported, with its international spread declared as a Public Health Emergency of International Concern by the WHO Director-General since 2014. The situation has been exacerbated by a global shortage of IPV, where many countries have not been able to introduce IPV in their routine immunization programs as recommended by WHO.

“LG Chem will facilitate the polio endgame by delivering the much-needed doses to infants in need of safe and effective polio vaccines,” said Ji-woong Son, Head of Life Sciences at LG Chem, “and will continue to contribute to improve global health by ensuring global accessibility of such essential vaccines.”

LG Chem developed Korea's first recombinant hepatitis B vaccine, Euvax™, and has since supplied it to more than 80 countries worldwide for the past 20 years. It has consistently invested in R&D to also develop the pentavalent vaccine, Eupenta™, which was prequalified in 2016. Development of Eupolio™ was supported by the Bill & Melinda Gates Foundation, with an extended partnership to develop a hexavalent combination vaccine, total awarded grants amounting to USD 57.6 Million. LG Chem’s hexavalent vaccine currently in clinical phase II is designed to prevent diphtheria, tetanus, pertussis, hepatitis B, haemophilus influenza type B, and polio, and aims to launch in 2024.

LG Chem Life Sciences is a business division within LG Chem, engaged in the development, manufacturing, as well as commercializing pharmaceutical products globally. LG Chem Life Sciences seeks to expand and make global presence by focusing on key core therapeutic areas of Immunology, Oncology, and Metabolic Diseases (specifically, diabetes and related metabolic diseases). To achieve such, its strategy is to actively pursue global collaboration encompassing from asset-centric to strategic investment and collaboration.